As One 14th Most Produced Opera in U.S., Canada in 2016-17, Surpassing Turandot and Barber of Seville 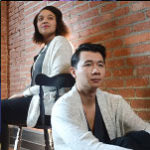 As One is the most frequently produced contemporary opera with two dozen productions scheduled since premiere at BAM in 2014.

Laura Kaminsky, Mark Campbell, and Kimberly Reed’s chamber opera As One was the 14th most-performed opera in the United States and Canada in the 2016-2017 season according to the Winter 2018 issue of OPERA America magazine and the only opera composed by a woman.