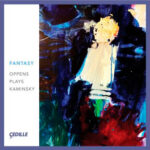 In the United States she is a celebrity, but in the Netherlands Laura Kaminsky (1956) is fairly unknown. Undeservedly so, because her music is both powerful and poetic and has an effervescent energy. The recently released CD Fantasy contains four compositions that were written between 2007 and 2019. All pieces were composed with or for piano and are played by Ursula Oppens. The subtitle “Ursula Oppens plays Kaminsky” highlights the decades-long friendship between composer and performer.