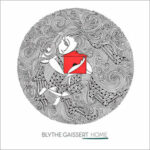 Widely sought after as an interpreter of new work and a collaborator with a wide range of contemporary composers, Gaissert conceived the new album after realizing what a vital role “having a safe, warm and loving place to live” has played in her life. The flip side of that realization, that much of the world’s population lacks that luxury and that the pandemic has only increased those numbers, was just as important, as she explains:

“We started having all of these horrific stories from the border about people trying to find a safe place to live being separated from their families, children isolated from parents. … [It] became obvious this is what I wanted to use as a theme. When I approached the composers, this resonated with them as well, both personally and in a larger social sense. … We now all, internationally, will have a different view of the word HOME forever.”

As Kaminsky and Reed write: In Carne Barata, Linda Morales, her heart breaking at the loss of her family, sings an aria in despair, “…look where we are. They make us fight…” She arrives at a moment of strength with the recognition that “America is impossible without us.” Our choice to include “Carne Barata” was further enhanced by the fact that Blythe, who was involved in early workshops of the opera, will be one of the three principals in the Santa Fe Opera premiere of “Hometown” in 2021.