A Musical Outcry from Laura Kaminsky 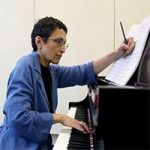 “Political and social themes are common in (Kaminsky’s) work. She wrote And Trouble Came: An African AIDS Diary after living in Ghana in the early 1990s, working at the National Academy of Music in Winneba. Her Vukovar Trio for Violin, Cello and Piano was written in 1999 after a performance in that war-ravaged village in Croatia, and is dedicated to the victims of ethnic cleansing. She composed the string quartet Transformations II: Music for a Changing World in 2002, in the aftermath of 9/11 … Innovative sound has been a driving force for Ms. Kaminsky since she was a child. Among her influences [are] Dmitri Shostakovich, Meredith Monk, Stephen Sondheim and Brazilian pop.” – The New York Times