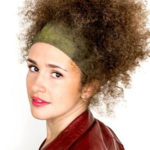 In honor of Pride Month and the 50th Anniversary of the Stonewall uprising, Kaminsky hosts and curates an all-female program by mostly lesbian composers and librettists

(Photo of Devony Smith by Delighted To Be Here)

Laura Kaminsky on her NYFOS Next program:
When Michael Barrett and Jesse Blumberg requested that I curate this concert in recognition of Gay Pride, and to commemorate the 50th anniversary of Stonewall, I was excited by the enormous possibilities. I immediately knew that I wanted a program that would celebrate all women — gay, straight, bi, trans, non-gender-conforming — and that the subject matter needed to be relevant. Happily, I had been involved in a project sponsored by Opera America that premiered at the Library of Congress two years ago, but hadn’t yet had a public hearing in New York. So Fierce Grace: Jeannette Rankin, on a libretto by Kimberly Reed, with songs by Kitty Brazelton, Laura Karpman, Ellen Reid and me, was a perfect fit. “Who is Jeannette Rankin?” is most people’s response when I mention her name. Only the first woman to be elected to Congress — in 1916 no less, before she could even vote — and on a pacifist platform to boot! But what to commemorate Stonewall? A new, similarly conceived piece, where all of the creators are lesbian. Poet Elaine Sexton created a beautiful cycle of poems, After Stonewall, and I, joined by Laura Karpman (again!), Jennifer Higdon, Paula Kimper, Nora Kroll-Rosenbaum, and Kayla Cashetta, each set one. I chose Marriage Equality, a concise and moving tribute to Edie and Thea. Need I say more?