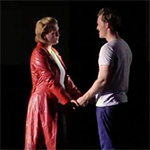 “Kaminsky has an extensive background in teaching and administration in addition to a long catalogue of chamber and orchestral works. The success of her first chamber opera, “As One” (2014), a poignant and effective piece about the transition of a transgender woman, has led to a new burst of activity for her on the chamber-opera scene; after “Some Light Emerges” for the Houston Grand Opera (2017), she is working on a new chamber piece for a consortium led by the San Francisco’s Opera Parrallele.”